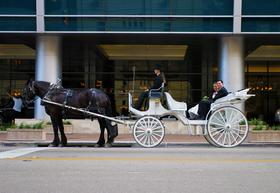 Office line is available from 3pm-6pm

Carried Mickey & Minnie Mouse to get their Key to Fort Worth

Carried the Gatlin Brothers to their concert at Billy Bobs

Featured in a Japanese Country Music Video in the FW Stockyards

Was the "Surrey with the Fringe on Top" for the play Oklahoma! onstage, at Bass Hall

Contributed four carriages to the Bass Hall Groundbreaking Ceremony,
our name is inscribed on the beam inside!

Featured in the Fort Worth CVB presentation Video